Kalamazoo to Ferguson: Students and staff from Kalamazoo College and Western Michigan University travelled to Ferguson, Mo for the Weekend of Resistance.

Why did you go to Ferguson?

I went to Ferguson to learn more about the work of the local activists and to be a part of the movement. I also wanted to see first hand what was happening in Missouri as well lend my voice to this cause. I was deeply saddened and upset by the killing of Mike Brown and I wanted to play my part in ensuring that justice would be served. – Sashae Mitchell, A Tough Mind and Tender Heart featured activist

I went to Ferguson to support brothers and sisters in the struggle as well as take the vibes back home so people understand how real it is and organize around issues pertaining to my community – JaRay Reese, resident of Kalamazoo and member of Kalamazoo for Justice

Being born in Inglewood and raised in Hawthorne, the realities of police brutality is a common experience within and around my community. Recognizing that police brutality and the criminalization of men of color is an issue that extends well beyond my family and communities that I’m a part of, given the opportunity to take a stand against institutionalized racism with folks from all over the country and even world in Ferguson, I had to go. It was a must for me. – Mele Makalo, Kalamazoo College Senior

What did you hope to accomplish personally? Were you successful?

I wanted to learn more about what had happened and how I could share my experiences once I returned to Kalamazoo. I also wanted to serve and contribute my time wherever it was needed. My service as a volunteer was rewarding and I’m sure it was appreciated but I think being in Ferguson did more for me than I did for them. Much of time there revealed more than what had transpired in the Mike Brown case but reinforced the fact that we have to address the serious issue in our society where young black men are considered ‘suspicious’ and are ultimately being killed by the police or others. Michelle Alexander so carefully describes the issue of mass incarceration in communities of color in her most recent book, the New Jim Crow but I would dare to say that this level of state sanctioned violence could be described as the new lynching system. Very Disturbing! – Sashae Mitchell

I hoped to accomplish unity and strength in the perpetually rotating racism within all community and to share knowledge – JaRay Reese
Organizers from St. Louis attended a conference held at K College and extended a call to action and support from the K College community during the weekend of resistance. My goal was to utilize that privilege and support by being the best support upon the request of organizers. As a behind the scenes volunteer, they didn’t ask much of me but I did what was asked of me. Additionally, I wanted to meet folks that were organizing outside of Ferguson with the intention of discovering ways to transform our own unique communities collectively across the nation. I was able to do that and have maintained a relationship with those who I’ve met and gotten to know specifically because of the gathering in Ferguson. For this reason, I think that Ferguson, organizers, and people there did much more for me than I was able to contribute to the movement there specifically because it was such an enriching experience. – Mele Makalo

As an activist, how has this experience effected you? Share one meaningful aspect of your trip?

The outpouring of love and support was tremendous! I went to Ferguson hoping to experience much hostility from the police and others and while there may have been some of that, I was really fascinated by the love at each rally or march we had on that weekend. I was encouraged and inspired by the number of people who came to Ferguson to support this cause. I left feeling hopeful that regardless of what the grand jury verdict was, we were successful in bringing people of liked minds together to advocate and fight for the future of young black people in this country – Sashae Mitchell

This experience has brought strength in like minds and has also brought reality how so many people are lost despite issues being right in your face, dissonance is real within communities and are uncomfortable with the truth. – JaRay Reese
The love there was very real. On the first night, we went to a rally downtown in which an entire intersection was blocked off by the police. There were protesters standing around while a select few were right in front of the police passionately expressing their distaste towards militarized police. I too, carry a strong dislike towards the police. Then I heard a comment “yelling and all this ain’t gonna change nothing.” I realized then that I needed to clear my heart of hate and attempt to talk to at least one officer which I was well aware probably wouldn’t be received but I still needed to work on myself because at that moment I realized that I had dehumanized every person in a uniform rightfully so but I needed to wage in love not hate. Partially in favor of the police but more so for myself because I can’t allow people that do so little for me to consume so much of me. People from all over the world showed so much love to each other. I had some of the most authentic dialogues with folks and we knew we probably would never see each other, but this didn’t stop us from building a genuine relationship and holding very real conversations. How do I replicate the genuine love and interest in getting to know folks through authentic interactions? When there is a genuine interest in getting to know our peers, it becomes difficult to treat or see others as subordinates. This is the kind of healing our world needs.  Most importantly, how do I engage in very real dialogues filled with trust, love, respect, and a pure ear to listen from all participating parties with those in power? I still think of this today. – Mele Makalo

What activities do you have planned to continue the work you began in Ferguson? 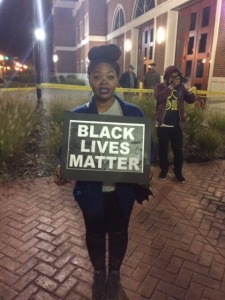 We have to keep the conversation going. We cannot allow this to be a phase that fades away. This has been one of my own personal goals in moving this work forward. I have initiated conversations with friends, family members and colleagues about racial issues, institutionalized oppression and other forms of injustices. This isn’t a black issue, it’s something that impacts all of us as people in this country and by extension, the world. It is my hope that through these personal, one on one conversations with more people, we will build a stronger coalition and work towards eliminating racism and ending state sanctioned violence. – Sashae Mitchell

Ultimately I feel my job is at the grassroots, to educate youth and families on issues regarding race and relations in America and educate brothers and sisters of color on embracing the skin there in… – JaRay Reese

Personally, I think that my involvement in the weekend of resistance was a part of the many forms of work that I am invested in towards being the best resource and support possible with vulnerable communities to combat institutions of oppression. I am a mentor in the Juvenile Home and I alongside 14 K College students facilitate life skills workshops and carry one on one mentoring sessions with each of the youth in the Juvenile Home in hopes of supporting them to disturb the school to prison pipeline and institutionalized script for them to end up in prison. I have also been involved with Kalamazoo for Justice group that has been organizing in alignment with the Ferguson Actions. Whenever I am home in L.A., I join local organized events in relation to Ferguson Actions. In the classroom, I actively take on the role of student facilitator to ensure that discourse addresses the very real issues that arise due to racism and all other forms of oppression. Most importantly, I’ve committed myself to lifelong research. We can’t change what we don’t know. We must know the communities that we are reforming. As I learn from my experiences and varying forms of self education, I implement these things into my work as a senior resident assistant, president student ambassador, Secretary of student affairs, tutor, and Asian Pacific islander student association president. – Mele Makalo

Kalamazoo in the News: Providence Journal and USA Today