It’s Bigger Than You is a community based organization whose members have traveled to Ferguson three times and are leading direct actions and protests in Atlanta, GA.

Why did you go to Ferguson?

It was necessary to stand in solidarity with young people there. The presence of the National Guard and police was very strong. The organizers on the ground needed a support network and activists who could help maintain a sense of community.  I felt a sense of personal responsibility to the young people under attack. Aurielle Lucier, founder and Executive Director, It’s Bigger Than You.

I have been to Ferguson three times. Each trip was designed to show solidarity but each trip had a unique purpose. The first trip we went to show support, to get a real feel for what was happening, to show that Atlanta cares and  to be there to fight with and for the residents.  During the second, I was there because there was a call to all nations to come and show their support. That trip, we also spent time in Shaw, Missouri which is about 5 miles from Ferguson where we protested in reaction to the Oct 8, 2014 shooting of Vonderrit Myers who was shot six times in the back of the legs and one time in the facet by an off-duty police officer who says Myers fired at him during a foot chase. We were in Shaw to show there is strength in numbers. The third trip was to do planning and organizing.  Queen K, community organizer, member of the Executive Board, It’s Bigger Than You.

What did you hope to accomplish personally? Were you successful?

I didn’t have a personal agenda or a motive other than to give and stand in solidarity with freedom fighters.  We were successful because we were able to unite with the organizers of three of the major Ferguson grassroots efforts: Hands Up United, Ferguson Action Plan and Black Life Matters. Our group of 30 people caravaned by cars to Ferguson three times and provide supplies, participated in protest actions and stood guard during Night Watch as well as  helped with direct service programs for  the community including a Halloween Carnival and a Books and Breakfast event.  Aurielle Lucier

Yes, we were successful in our efforts. One example is the Die-Ins that were held in Atlanta and  in cities across the country. The goal was to get all cities and states involved in the resistance;  to be on the same page and that was accomplished. Queen K

As an activist, how has this experience effected you? Share one meaningful aspect of your trip? 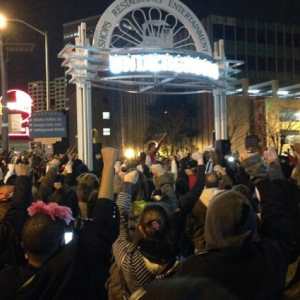 Protest at Underground Atlanta the day after the No Indict Decision

I learned what it means to be in an intense situation and to face peril.  During the times I participated in the Night Watch it was quiet but we were trained to be prepared.  Some activists were shot with rubber bullets and were right back on Night Watch once they were released from the hospital. Their actions demonstrated what I believe and am willing to do –which is put my life on the line. I am willing to give up my comfort zone, my sense of security and safety, my livelihood, my life. Upon my return to Atlanta, I became even more vocal and have received death threats. Recently, I was  arrested during a nonviolent protest at Atlantic Station.  I was arrested at 6:15 pm and finally booked at 2 am at the Fulton County Jail on Rice Street  after I had been transported by paddy wagon to four jails in metro Atlanta. During the  seven hours and forty-five minute ordeal I experience many things including being chained to a bench and  sexual harassment by male correctional officers. It was scary.  I now understand what it means to sacrifice and to be “selfless”  in the pursuit of justice.  Aurielle Lucier

My phone is monitored, my computer was wiped and I am struggling to find a job.  I am  physically and mentally exhausted. I face roadblocks and difficulties.  I share a life style similar to other activists in that we don’t have a lot of money or financial backing yet we are able to do so through our sheer determination and commitment to the cause.  I was also deeply moved by an interaction with a 3 year old I met on the streets of Ferguson. He was crying, probably scared because people were chanting and screaming.  I believe that we don’t leave anyone behind, especially children. Everyone deserves an invitation and  information so that they can choose to be useful.   It is very important for young people to understand what is going on so I knelt down and started talking to him. He stopped crying after I told him  that  the people in blue were the bad people and not to let them, the bad guys, see him cry. Just cry with us,his community. Just show your tears to us. Let the bad guys see your super powers. He reflected on having super powers and said okay. He stood up,wiped his eyes and put his fist in the air to prove he had super powers and understood what it meant and kept it there. Later on that night I saw him walking and chanting with his mother. The next morning at another protest someone captured him in a a picture where you see him all alone in front of police cars. The younger generation  should not be ignored. They are sponges and must be directed the right way.  There are no age limits in the revolution. Queen K

These young people have demonstrated their resolve in their continued battle cry that “Black Lives Matter.  We embrace their role in our ongoing struggle for freedom  and self determination.”- Mawuli Davis, Atlanta attorney and TMTH featured activist

What activities do you have planned to continue the work you began in Ferguson?

We were charged by the leaders in Ferguson to continue raising awareness in our community through direct action and protesting.  We will continue to do that work. Our first action was to participate in the 48 Hours of Solidarity Campaign that was planned which called for activists in 300 cities to hold demonstrations regardless of the grand jury outcome in an effort to educate people and build public will. In Atlanta, It’s Bigger Than You held a community speak out that was attended by 5000 people and lasted for 4 hours symbolic of the 4 hours Michael Brown’s body laid in the street, we marched through the city and presented our demands and the Ferguson demands to the mayor, we attempted to hold Die-Ins at Lenox Mall and Atlantic Station where activist would literally lay down on the ground as if dead. We also interrupted Attorney General Eric Holder’s speech at Ebenezer Baptist Church which was the first town hall meeting the Obama administration held to hear from the community.  It’s Bigger Than You members  chanted Assata’s words as they marched out of the church and I presented Mr. Holder with our demands and departed as well.  We were effectively saying there is no justice so you get no peace. Silence on this matter doesn’t save or protect you. You cannot pacify us with private meetings or gatherings in public spaces. Aurielle Lucier

Our major activity is to send the message out to buy Black. 1.4 trillion dollars is placed in the economy by black and brown communities. What changes would our communities see if that money stayed in the community.  There is an African proverb that says, ‘ only a fool allows his child to be educated by his enemy’.  We want to be able to operate without financial support from the government. The Alabama Bus Boycott lasted over 1 year during the Civil Rights movement. The community surely can make that commitment and take that extra 10-15 minute drive to support Black and Brown business by spending their dollars there. Queen K

Would you like to be trained as a Legal Observer? Here’s an opportunity you don’t want to miss!